The People who keep Eagle soaring

The dream of every business is to have a dedicated Avengers-style team combining to make light work of any tasks and jobs. Luckily, not only do we have some of the best super-staff around but some of them even come with costumes included! However busy we get we love unmasking our staff. Our company is made out of real people with real lives and in the spirit of celebrating our staff’s individuality we’d like to introduce you to three of our star employees. Much like the Avengers, they couldn’t be more different but thanks to their individual talents they’ve helped to Zap and Ka-pow Eagle into Scotland’s super courier.

Sadly, not everyone thinks this is as awesome as we, at Eagle, do. Picking up his 14 year-old daughter from school in it has become the ultimate “embarrassing dad move” and the Bane of her existence. Though having recently attended a superhero convention dressed as Batman’s arch-villain Poison Ivy, this attitude change is possibly more akin to Harvey Dent’s Two Face.

Scott said: “I took her to Comic Con dressed up as Batman, and dropped her off. Folk were cheering and waving, they absolutely loved it!” Although Scott has already spent quite a bit of time and money on the car and his hobby, he has plans to spend up to £4,000 in total on further modifications. He added: “My wife thinks I’m crazy, my daughter thinks I’m crazy, the people I work with think I’m a wee bit mad, but you know what, you only live once.”

Our Very Own Girl Wonder 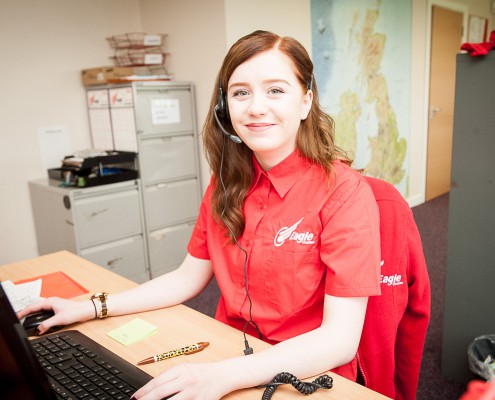 Secondly, we’d like you to meet one of our youngest experts who only started in 2014 but has already made a massive impact.  The Robin of our team Alana Jamieson, just 18, left school in Livingston with a handful of qualifications and is now thriving at Scotland’s largest independent courier.  Co-Director at Eagle Couriers, Jerry Stewart, said: “When Alana came to us early 2014 we could see a star in the making – she has a very personable manner and is a great communicator, something that is vital in our line of work.”

We believe that no matter what background you come from you can achieve your potential and that traditional schooling and education isn’t for everyone. Alana has epitomised the hard work and hands-on learning that we believe in.

Jerry highlights: “There is simply no substitute for the practical skills that you acquire while earning your way in life.” She’s still finding her way in life but is rightfully optimistic about what the future might hold: “I’m not entirely sure where I’d be without Eagle. It has made me much more independent – I now have a car and I’m looking to move away from home.

“Perhaps the biggest thing it has done is give me ambition to use all that I am learning so I can push on in my career and one day even own my own business.” 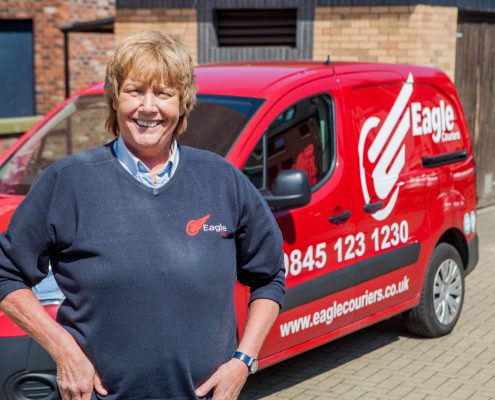 June Dryer, former Miss Lothian ’78, has racked up an impressive amount of mileage whizzing around Edinburgh and Scotland. Some might say she’s our very own Flash. June averages around 700 miles a week and as she is approaching her 32nd work anniversary it is estimated that she has driven enough miles to drive to the moon and back with an unbelievable quarter of a million to spare!

Edinburgh, with its mix of cobbles, wynds and roadworks, can be particularly challenging, but June has thrived and loves donning her super-suit (Eagle uniform) for a day of work. A Musselburgh native, she highlights the perks:  “I love driving and I love Edinburgh – so this job suits me to a tee. The day I wake up and struggle to find the motivation to work may be the day I choose to retire, but there is no sign of that happening any time soon.

Over the years June has encountered some truly heroic jobs which have included saving a lost dog by transporting it to its owner and picking up Madonna’s wedding dress from Edinburgh Airport.

Having been here since the very start of Eagle, Co-Director, Fiona Deas was quick to praise June’s contribution to the company: “Successful companies are built around people like June and with all her hard work over the years she’ll always be a superhero to us.” 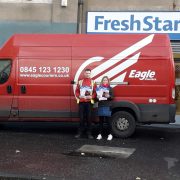 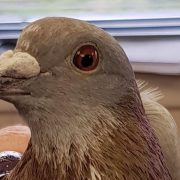 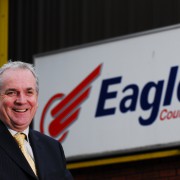 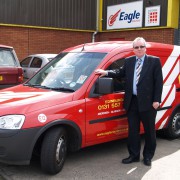 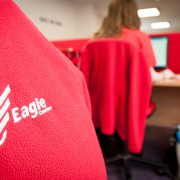 Brand New HQ Gets Eagle Soaring With the Press
0 replies

Please let us know at feedback@eaglecouriers.co.uk
An Open Letter to New Minister for Transport and the Islands, Humza Yousaf