Launched in 1985, Comic Relief has well and truly captured the nation’s heart and mind.

As it enters its 30th year, a staggering £700 million has been raised through donations, with every pound donated going to good causes.

An inspiring idea – through laughter and joy can we shine a light on true misery and suffering. A daft wee red nose can do so much good.

At Eagle Couriers we like to embrace modern methods in all that we do. Through our online tracking, innovative modes of transport and our market-leading website we know that we get the best results through keeping relevant and ahead of the game.

So we have compiled a list of ‘on-trend’ ideas designed to capture the imagination and raise money for Comic Relief in 2015.

Surely a bake sale in 2015 is ‘old-hat’ you say? No chance, give your event a bake-off twist. Who would have thought in 2015 we’d all be going bonkers for Berry’s buns and hyper for Hollywood’s hot-cakes?

Getting the bake-off atmosphere doesn’t require a luxury marquee in the Home Counties – the soundtrack played alongside a blind taste test will give your bake sale a bake-off vibe!

For so many of us – and we aren’t just talking to the teenagers out there – the thought of putting down our smartphone for just one hour is simply tortuous. In fact various surveys out there have suggested that a staggering 90% of smartphone owners check their handset first thing in the morning!

Perhaps a day or even a week without tech is just the tonic and the route to take for fundraising success.

3. Sell It With a Selfie

This isn’t exactly our idea – but we love it and had to nick it. Get your silly selfies in by sending to Comic Relief and raise money for a good cause whilst pouting like a maniac. Kim K take note. 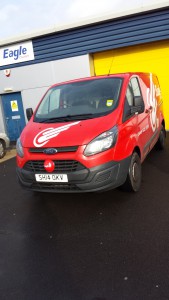 The rise of Simon Cowell has brought with it the reincarnation of the talent show. This has resulted in (depending on your disposition) a revitalisation of Saturday night telly or the demise of the music industry.

Whichever way you feel, stage your own Cowell-esque show at your school, community hall or workplace and allow your talented friends and colleagues a chance of the limelight and show Mr Cowell just how it is done.

5. Give Your Vehicle a Honking Hooter

We are well and truly car daft here, with the total number on the roads at a dumbfounding 32 million.

And with so many of us spending vast parts of the day behind the wheel why not brighten the day of your fellow road-users whilst raising money for the cause?

This is the road Eagle has travelled. Our most recognisable and visible assets are our red vans – so we thought, why not make them even redder?

So we did… by adorning 12 of them with a comedy red nose and donating extra as well. We even got them customised with a wee bit of Eagle Courier branding.

If you get see one of our Scottish parcel delivery vans on the road give them a wave – and if it stirs you into donating or fundraising further for the cause then all the better.

…Have a great Red Nose Day this Comic Relief 2015.

Please let us know at feedback@eaglecouriers.co.uk
FIVE REASONS YOUR MUM DESERVES AN EXTRA FREE TREAT THIS MOTHER’S DAY – AND...