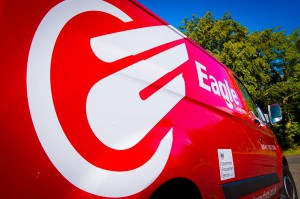 When a major Hollywood movie is being filmed in your city, it should create an economic boom time for local businesses.

Not only is there the glitz and glamour of having A-List superstars in town, but there’s also the welcome influx of hoards of camera crew and background staff into the city while filming is taking place – all of which should create a welcome boost for the local economy.

But when Brad Pitt’s latest blockbuster zombie movie World War Z was filmed in Glasgow recently, instead of reaping the rewards, we actually found that it caused nothing but chaos for our business.

At Eagle Couriers, we rely heavily on the city’s road network in our day-to-day operations, and our drivers make hundreds of journeys throughout Glasgow every week.

When World War Z was filming, we had huge elaborate sets built around George Square and more than 1200 extras brought to the city for the actual shooting. Roads were closed to traffic and, to add to the commotion, thousands of onlookers flooded the streets to try and catch a glimpse of Brad Pitt himself.

Of course, this disruption had a huge knock-on effect to the rest of the city’s transport network. The road closures meant that alternate routes were jam packed and journeys that should have taken a matter of minutes were actually taking close to an hour.

Furthermore, the city council appeared oblivious to the problems that this filming was creating for local businesses. There was clearly insufficient contingency planning in place to cope with the upheaval in the city centre and many transport firms like ours were just left to bear the full effects of these problems.

Even though Brad Pitt’s film is finished, we met another challenge in Glasgow as the second Holywood film to visit in a matter of weeks came to film a major motion picture. This time it was Halle Berry and Tom Hanks who became the star attraction during the shooting which took place until the 26th of September.

I believe that during this difficult time, Glasgow City Council should be looking at ways in which they can help businesses like ours – such as allowing taxi and bus lanes to be used for delivery vehicles. This certainly would have been a tremendous help in ensuring that we were able to get on with our daily work during the World War Z filming period, and it could be a well needed boost during the new movie shoot as well.

There’s no denying that, when major film productions come to Glasgow, it is a huge benefit for the country. The city receives a huge amount of international exposure and, if it is a successful shoot, it can encourage other companies to come and invest in the future.

However, we also believe the council has a duty to protect the businesses which currently operate in Glasgow, in order to allow them to continue their work without unnecessary disruptions.

I was given no confirmation that any of the issues faced by scores of businesses during the last Hollywood were negated. I am aware that the scale of the Cloud Atlas shoot was of a smaller scale but we still suffered delays for our journey times.

All too often it is delivery firms who are left to face the consequences of scenarios like this. It’s about time that our elected officials remembered that, just because there are economic benefits to be made from giving investors the free reign of the city, it isn’t always good news for the rest of us.

Please let us know at feedback@eaglecouriers.co.uk
Couriers Concerns – No Incinerator Wanted In Carnbroe