I’ve always loved the old Scottish saying, “like snaw aff a dyke” as a way to describe anything which disappears fast.

Now though, it seems rather ironic that Scots were once so assured a speedy disappearance of snow that it should become a cheerful proverb.

In early 2015, the only thing vanishing quickly is the patience of Scotland’s motorists. The reason is that any snow falling in Scotland steadfastly refuses to disappear.

Now it seems that even the lightest dusting of snow is destined to long outstay its welcome, particularly on our motorways and other transport arteries (and presumably on dykes as well).

On Friday, January 16 snow blanketed the west coast of Scotland, as predicted by weather forecasters. While the fall was neither unexpected nor particularly long, it was reasonably heavy. Indeed, football fans hoping to watch the Rangers V Hearts match on TV were instead treated to images of the white stuff quickly piling up at Ibrox stadium and the surrounding streets.

We’re reasonable people. We understand it is impossible for snow to fall like this without some sort of disruption. It’s entirely expected that traffic will move more slowly and that journeys will take longer, while snowploughs and gritters do their work.

The problem is that there weren’t slight delays, or even moderate delays. Nor was there an understandable level of disruption. In fact there was widespread and far-reaching chaos. 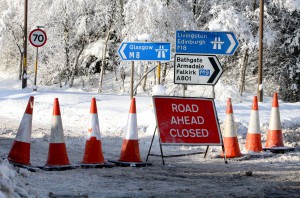 I know this, because my own M8 journey from Bathgate to Airdrie took 90 minutes. Not some B-road trip through snow piled several feet high, but a 15 mile jaunt along the nation’s main motorway after no more than an inch or two of snow.

I count myself lucky.  A colleague spent three hours making the M8 trip from Bathgate to Glasgow. One of our drivers spent almost two hours stuck in his delivery van in Greenock. Across central Scotland our fleet of 100 delivery vehicles faced similar tales of woe.

This is far from the first time. When central Scotland was blanketed by snow in early December 2014, there were similar problems widely reported in the media, including my plea for you to get a grip of this costly and debilitating problem for business, as your Government has promised it would.

In the ferocious winter of 2010/11 the months of biting, freezing weather including deep snow caused such traffic chaos that it cost then transport minister Stewart Stevenson his job.

We were promised that lessons were learnt. That contingencies were in place. That it would take adverse weather of epic proportions to ever bring that scale of disruption to our roads again.

The two snowfalls so far of winter 2014/15 have exposed those promises as hollow.

Among ordinary drivers and those who make their living on the roads, trust in your winter weather roads policy is fast melting away.

My advice to you is that you need to do something fast. Or it could be the career of one more Minister that is disappearing like snaw aff a dyke.