Blog - Latest News
You are here: Home / Blog / Scottish parcel delivery boss excited to be elected to fellow of IoC

My Last Days Before ‘Donning’ the Gown

After spending more than 25 years in the courier business, I really didn’t think it would be me on the receiving end of a surprise delivery.

But I was genuinely taken aback – as well as humbled and delighted – when I received the news that I have been elected a Fellow of the Institute of Couriers.

First of all it’s an incredible honour to receive and really makes those 26 years in the sector feel worthwhile.

On top of that I am incredibly excited about the prospect of my gowning ceremony, which will take place in the House of Lords – an incredible place, steeped in history which I’ve only ever seen on TV.

It is a particularly proud moment, because I will be the first independent Scottish-based courier to be made a Fellow of the Institute.

I’m hoping that almost three decades of experience will serve me well in my role and I will definitely be championing the issues that affect Scotland, offering a Scottish perspective on transport issues and policy.

Having seen the industry evolve over the years in the UK and I am looking forward to having a contributing voice in future policy and decision-making. 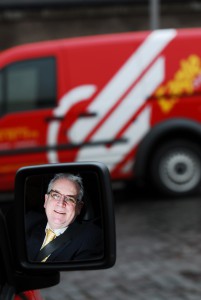 A top priority for me will be to keep regular correspondence with the Institute to assist it in its aim of establishing a national recognition of standards for those who work in the industry and to promote professional safe practice.

My nomination came thanks to a current Fellow of the Institute, Kevin Grey, who is the managing director of Point-to-Point Couriers, a transporter based in London who took up his position in 2013 thanks to his decades of commitment in the courier.

Even though I’m not normally one for pomp and ceremony, I am like an excited schoolboy looking forward to my gowning ceremony on the February 6 in The House of Lords.

It’s going to be a great day recognising my, and Eagle Couriers, commitment to the industry and a chance for this Scottish parcel delivery firm to take centre stage at the House of Lords.

When it comes to getting my new gown home, I’ll do the sensible thing to safely transport something precious – and send it via Eagle Couriers!

Please let us know at feedback@eaglecouriers.co.uk
For Crying Out Loud! The World According to ‘Jeremy’ Stewart!