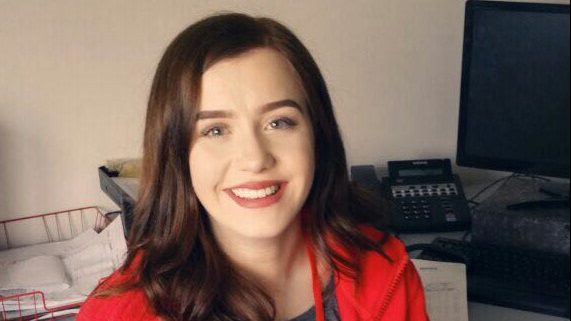 To kick start our new team-member focus of the month, we sat down with 19 year-old Alana from Livingston, who joined the team at the age of 17, straight from high-school, as an operations assistant. She impressed us from the outset as a shining example of the merits of apprenticeships and practical training.

Now we’re finding out about our youngest accounts assistant – delving into her eating habits, her curiosity for Tupac and the things that make her go ‘Ew!’.

What do you do at Eagle Couriers?

I was recently promoted to accounts assistant and I’m really enjoying my new role.

How long have you been working at Eagle Couriers?

It will be my third year working at Eagle Couriers on the 1st April.

Do you have any strange delivery stories/ encounters from your time at Eagle couriers?

There are so many it’s hard to come up with one specifically. Once we were asked to transport a bear from Edinburgh to Dundee, to this day I’m not sure if it was a prank or not. The man said he was moving house and needed to move the bear from his enclosure, but we thought he’d be better contacting Edinburgh Zoo!

What do you most enjoy about working at Eagle Couriers?

I really love all the friends I have made whilst working for Eagle, so I’d have to say the team of people is my favourite part of working here.

What’s something unexpected about you?

I think it would be the amount that I eat. I have a huge appetite and I eat like a horse all the time, but I’m still really skinny – Sorry everyone!

When I’m not working I love spending time with my friends and family.

What’s one food that you can’t stand?

Oh gosh, there are so many. I’m a really fussy eater so it would take forever for me to say all the foods that I hate but I really can’t stand mushrooms. I just hate everything about them, the taste, the texture – I just think they are really slimy.

On the other hand, my favourite food would definitely be nachos!

If you could live inside the world of any book/ TV / series or film which one would it be and why?

There is a book trilogy I love called Red Queen, I think it would be that world because it’s really cool. Everyone has different blood that gives them different superpowers which I think would be amazing.

What kind of animal do you think you’d be?

I’d love to be a giraffe because they are my favourite animals – I’m actually going to an adventure day at the safari park where I get to feed one which I am so excited about!

If you could have dinner with any 5 people living or dead, who would it be and why?

Amy Winehouse because I was always such a fan of her and think she would be really interesting.

Johnny Cash because I love his music.

William Wallace because I think he would be really interesting and there’s a lot I’d love to ask him.

Tupac so I could find out who really killed him.

If you were stranded on a desert Island and you could only bring three things with you what would they be and why?

Assuming I’ve already got the basics like food and water, I would have to bring my Cat – Gypsy – because I would hate to be away from her, she’s so cute. My phone, so I could keep in touch with family and friends (and maybe get rescued) and sun cream because I burn easily.

If you could have any super power what would it be and why?

I was thinking about this question before and initially I thought I’d like to be able to read minds, but the more I think about it I’m not sure want to know what everyone is thinking about me!

I don’t think I’d want to go forward because I don’t think I’d like to see the future before it happens, so I’d go back to the prehistoric period of the dinosaurs – just as long as I knew I wouldn’t be eaten!

If you could teleport yourself anywhere in the world right now where would it be?

Please let us know at feedback@eaglecouriers.co.uk
A Look At The Impact On The Electronic Travel Ban