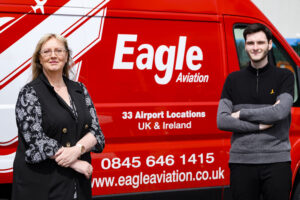 The Bathgate-based firm now provides a daily service to 33 airports and 120 airlines groups, from Inverness Airport in the north of Scotland, to most of the main Scottish and English regional airports, London Heathrow and Gatwick airports, Belfast and Dublin.

Handling and returning more than 350,000 bags per year to their owner-travellers, Eagle Aviation clients include Emirates, Jet2, Virgin Atlantic, Loganair, Etihad, and Ryanair.

The growth of the airport-focussed division underpins a group-wide success after the 45 employees-strong business pivoted into new revenue streams during the Covid-19 pandemic.

Eagle Aviation was able to quickly build on the network of THS Couriers, a business acquired by Eagle Couriers before the pandemic but wound down as air travel ground to a near halt.

As global travel restrictions began to lift and confidence returned to the international tourism and business travel sectors, Eagle Couriers spotted the opportunity to fill a UK-wide gap in the baggage repatriation space after rival firms had called a halt to operations. 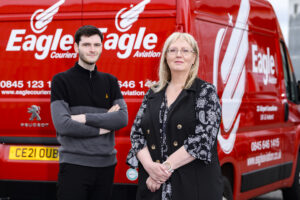 Eagle Aviation Operations Manager, Samuel Milne, said: “The pandemic was a major challenge for countless businesses, not least those operating in the courier sector, and while we remained busy on many fronts, there is no disguising the challenges we faced.

“But they say out of adversity comes opportunity and that is certainly true of the origins of Eagle Aviation. With global travel virtually at a standstill, the issue of airlines needing to return lost luggage to travellers pretty much disappeared overnight, and that inevitably led to the demise of several courier businesses working to service that requirement.

“We were monitoring the situation carefully and put a plan in place that could be swiftly executed if and when the travel restrictions were eased and inward UK flights started to increase.

“We continued to provide a reduced service for Airlines during the pandemic when passengers were being repatriated globally following lockdown restrictions.

“The launch of Eagle Aviation allowed us to maintain some existing baggage repatriation contracts we held under the THS brand, and when another provider left the market, it opened up new opportunities for us at London Heathrow and a number of major airports in Scotland and the North of England.”

Samuel Milne added: “We understand that delayed luggage is a difficult experience for passengers but we are countering that with an extremely hardworking and experienced team who are focussed on reuniting passengers with their luggage as quickly and effortlessly as possible

“We pride ourselves on being the UK’s leading provider in this specialist field and are looking at a number of ways in which we can grow the business and work in partnership with other global airline groups.”

Eagle Couriers Managing Director, Fiona Deas, said she was pleased at how the company, which has a fleet of over 120 vehicles, had weathered the coronavirus storm and adapted to changing demands on its services.

She said: “During the first Covid-19 wave in March 2020, there was a huge demand from local authorities, justice agencies, government departments and private companies to deliver tens of thousands of laptops, desks, chairs and other equipment, as working from home became a normal part of lockdown life.

“While a great deal of our office and corporate fulfilment business receded, we were proud to play a central role in delivering vital materials and medicines across the country, and due to the nature of our work our offices remained opened during all the lockdowns.

“Our work on behalf of the NHS remained consistent and in fact, we picked up additional work delivering anti-viral prescriptions to Covid-positive households, and we were involved in flying Covid-related items between the Scottish islands on a daily basis, providing much-needed connectivity to our rural communities.”

In January 2021, Eagle recruited another 70 drivers and added several office-based staff to the payroll after winning a major contract with National Services Scotland to collect staff PCR tests from every care home in Scotland for onward delivery to labs for testing.

Q&A with Business Development & Operations Support, Emma Ward When thinking about the ultimate dream team, we can’t be anything but grateful and proud to employ the best bunch of hard-working professionals. We sat down with Business Dev ...

A LEADING courier company has been using its scale for good by helping homeless people in the capital get a fresh start. Eagle Couriers has been teaming up with Edinburgh-based charity, Fresh Start, to spread the news of how volunteering and donations ...

Eagle Take Youngster Under Their Wing

A YOUNG man has accelerated his career by overcoming tough circumstances – and has paid special thanks to his work family. Sixteen year old Samuel Milne from Glasgow started his journey with Eagle Couriers in 2015 as he took on work experience at th ...

for advice on which service best suits your needs

This website uses cookies to improve your experience while you navigate through the website. Out of these, the cookies that are categorized as necessary are stored on your browser as they are essential for the working of basic functionalities of the website. We also use third-party cookies that help us analyze and understand how you use this website. These cookies will be stored in your browser only with your consent. You also have the option to opt-out of these cookies. But opting out of some of these cookies may affect your browsing experience.
Necessary Always Enabled

Performance cookies are used to understand and analyze the key performance indexes of the website which helps in delivering a better user experience for the visitors.

Analytical cookies are used to understand how visitors interact with the website. These cookies help provide information on metrics the number of visitors, bounce rate, traffic source, etc.

Advertisement cookies are used to provide visitors with relevant ads and marketing campaigns. These cookies track visitors across websites and collect information to provide customized ads.

Other uncategorized cookies are those that are being analyzed and have not been classified into a category as yet.